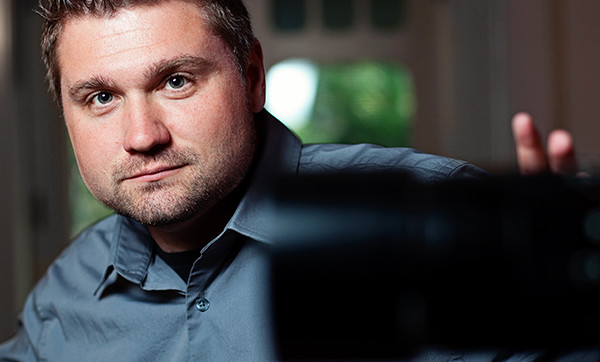 You don’t just wake up one day and say; I’m going to be a Wedding Filmmaker. It’s more like falling in love.

In college all I wanted to do was work for The Kansas City Star one day. MAYBE Sports Illustrated. Be the guy with the big lens on the sidelines; capturing moments in fractions of seconds. It was the dream and I lived it. Twelve years I spent at The Star, shooting everything from Big 12 Championships to Gang activities in KC to The Parade de jour. It was fun; everyday was something new and visually challenging. I never made it to SI, but they did publish a couple of my photos during that time. ESPN.com hired me for a few different projects. It was all I ever wanted to do; until Matt Frye invited me to a wedding.

A wedding…to shoot video. Video??? I was a photojournalist. I didn’t shoot weddings. I knew a little bit about video…enough to know I didn’t like it very much! I agreed to do it only because I loved Matt like a brother and wanted to make him happy:) Well I shot that wedding and I kind of liked it (I don’t think I told him that)…then I shot another and another. I spent hours, days and weeks editing each one meticulously. They were my babies; each one different than the next. In my day job at the newspaper my world was all about deadlines and how quickly you could produce great work so you could move on to the next story. But when I sat down to edit a wedding film, that couple’s story was the only thing that mattered. It didn’t matter how long it took me…it wasn’t done until their story was complete.
A couple of years go by and here I am; in love, all over again. Telling stories through film…not in fractions of seconds, but in real life heart-pounding, timeless moments.

Moments created by you.

You can contact me directly by email at michael@onetreestudios.com or by phone, 913-636-3474